What a year it has been! Amazing Adam and I rang in the New Year as any couple without kids for the night would do... we slept! Amazing Adam was coming out from under a hangover from the night before when he met up with his coworkers for some holiday festivities. That may be the last time he goes out with the guys unsupervised! Not really - it was kind of nice being the only one home for a few hours.

We had a great Christmas - celebrated 12/28-29 for our family because of parenting plans. I finished my final crochet project in the wee hours of our Christmas morning. Luckily enough, the kids - all of them - slept in until about 8:30am. 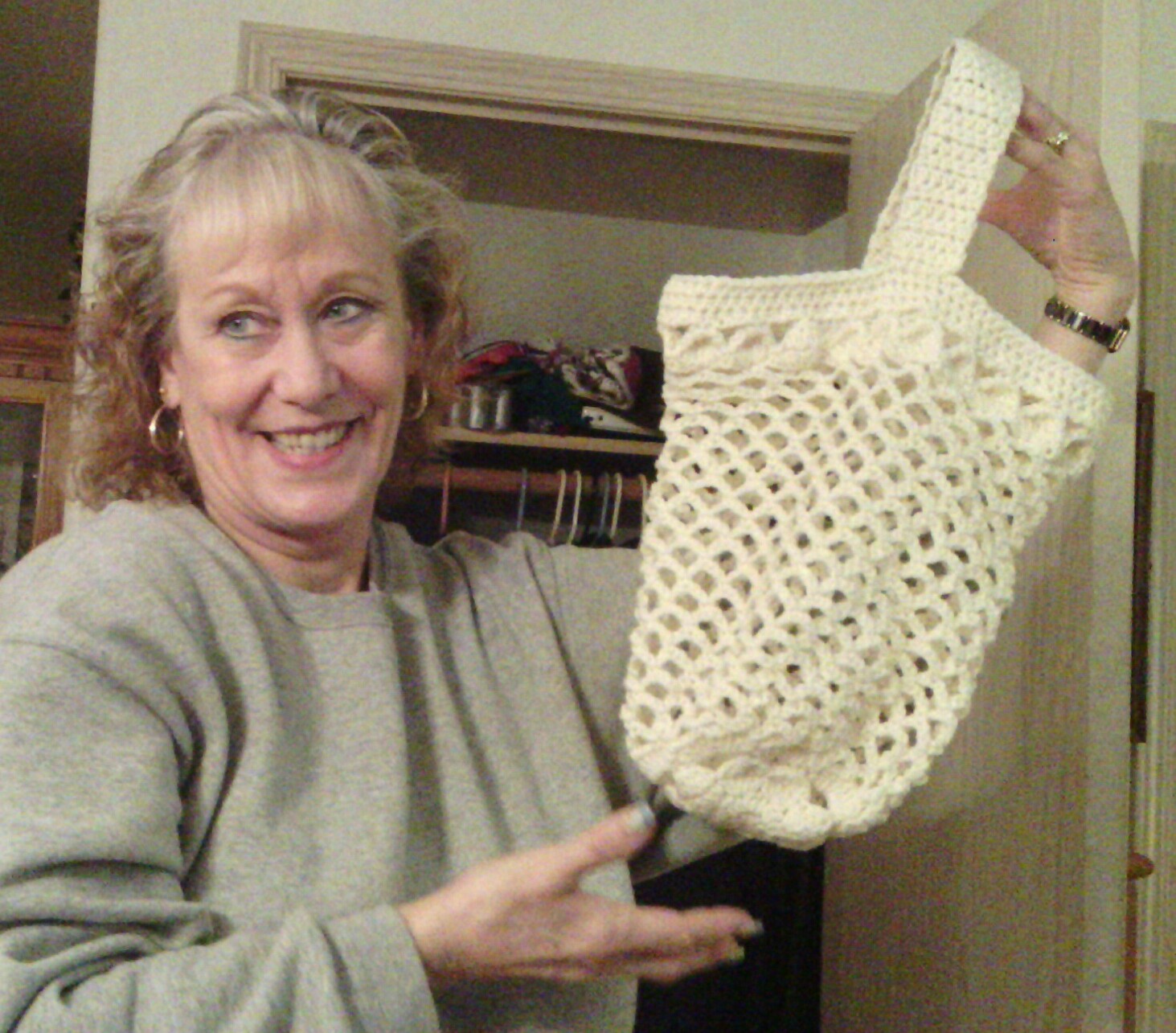 This year, I tried to get as many projects done as presents for the entire family as I could. I was able to finish this bag for my mom (in white), a cousin (in mustard yellow), and my sister (in jewel tones). This pattern can be found here as a free Ravelry download.

This bag worked up quite quickly after I learned the stitch clusters necessary to get the flower motif on the bottom. Now, it's not so bad to do - there's a lot less unraveling! 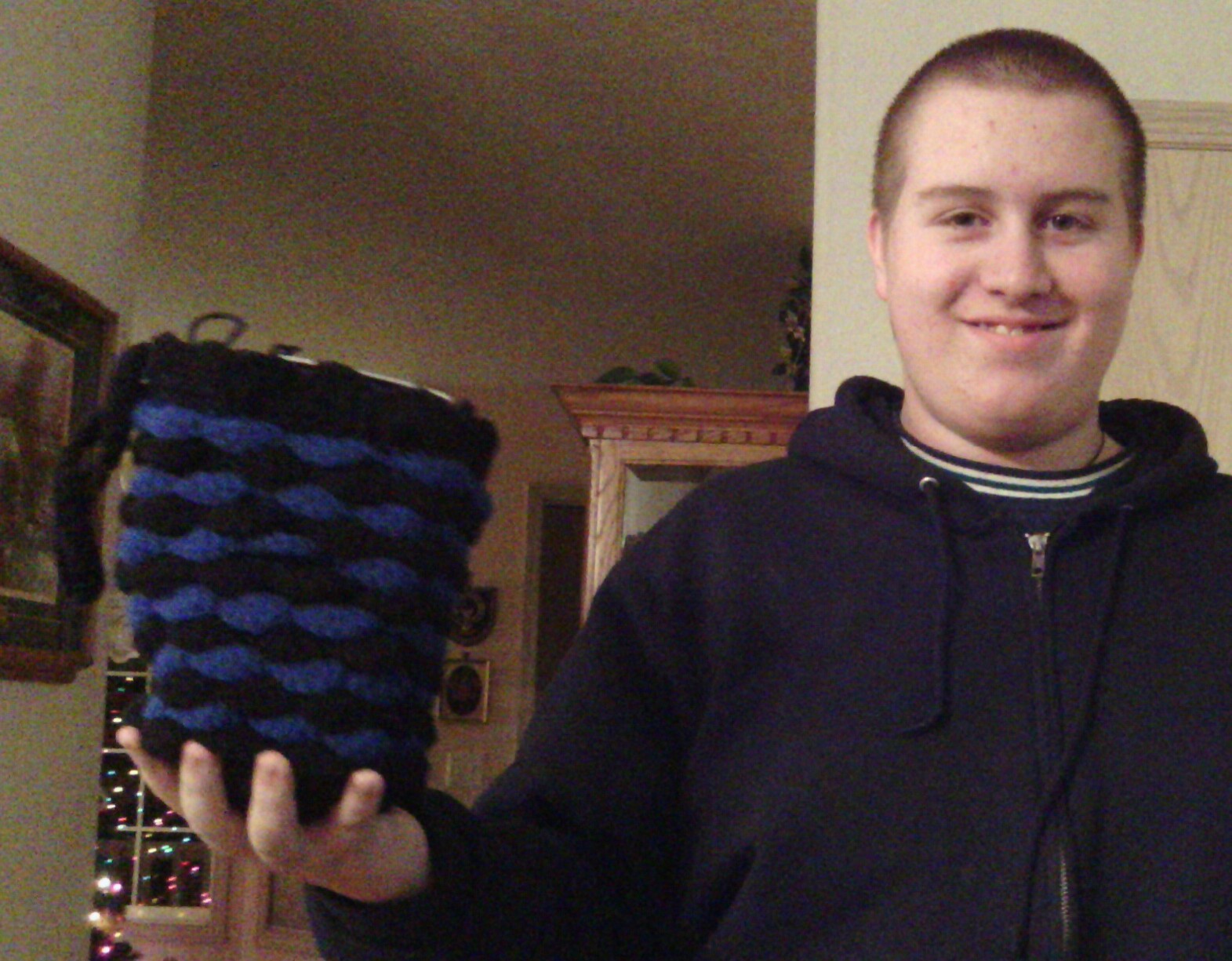 Riley has been playing a lot of Magic: The Gathering lately and has discovered the Penny Cards at our local comic book/geekery store; which has resulted in not only his collection of cards increasing exponentially but Amazing Adam's collection as well. So for Christmas this year, I found a Dragon's Egg bag pattern as a free Ravelry download, here.

I even successfully lied to Riley as I crocheted the bag right in front of him. Told him it was for someone at work. 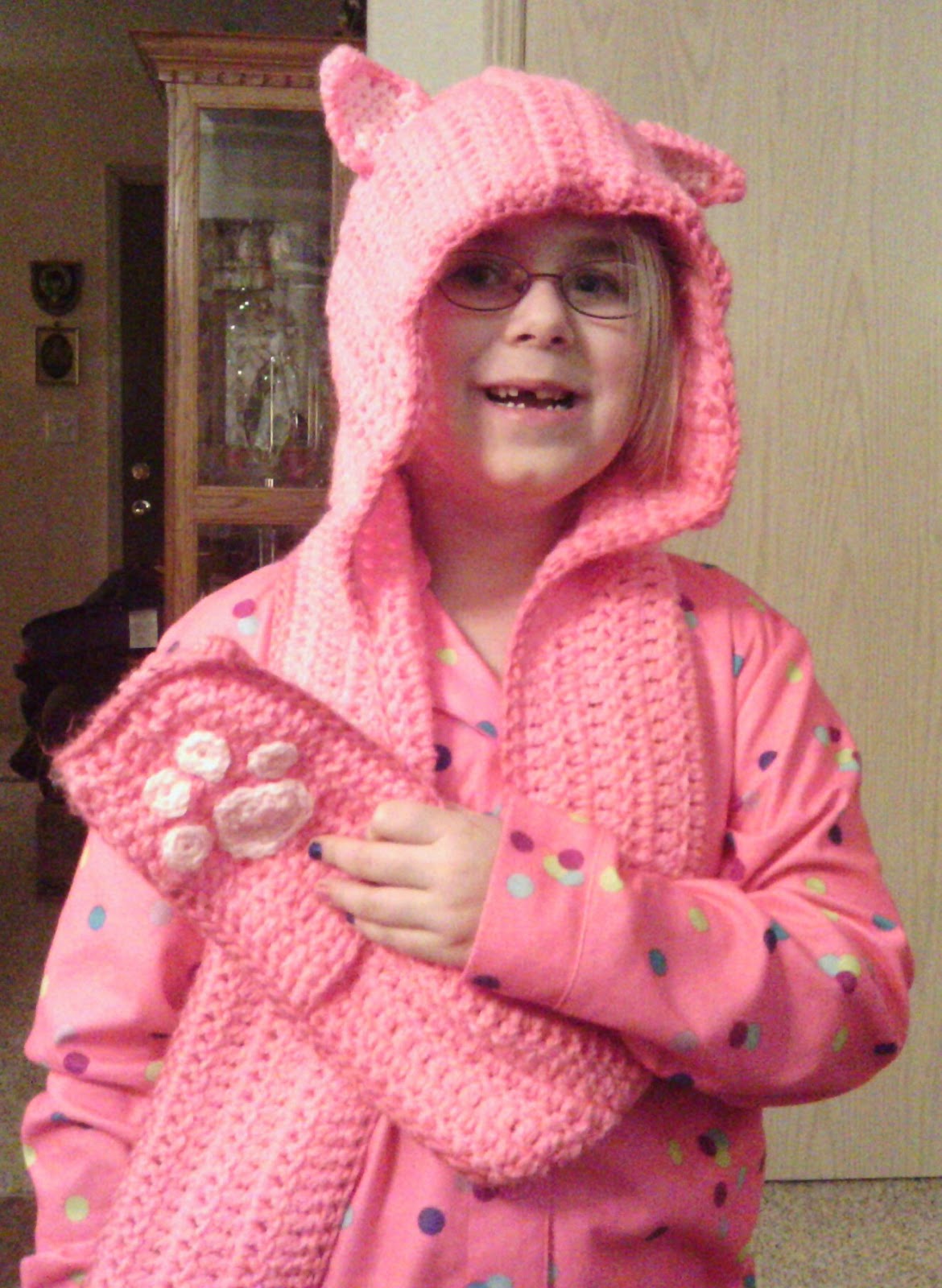 At more than one time this past year, darling little Aurora became increasingly annoying by sitting in the van or walking around the apartment and meowing rather than using her words, therefore she got a kitty hooded scarf, pattern was found here.

This picture does nothing to the color pink she was litterally covered in - she looks like a pink highlighter vomited all over her! I can't seem to get away from this color pink, but she doesn't seem to mind!

She owns a shirt stating that her favorite color is rainbow, so I'll have to start working with those in mind too. This was a fun pattern to make, it should definately keep her warm. 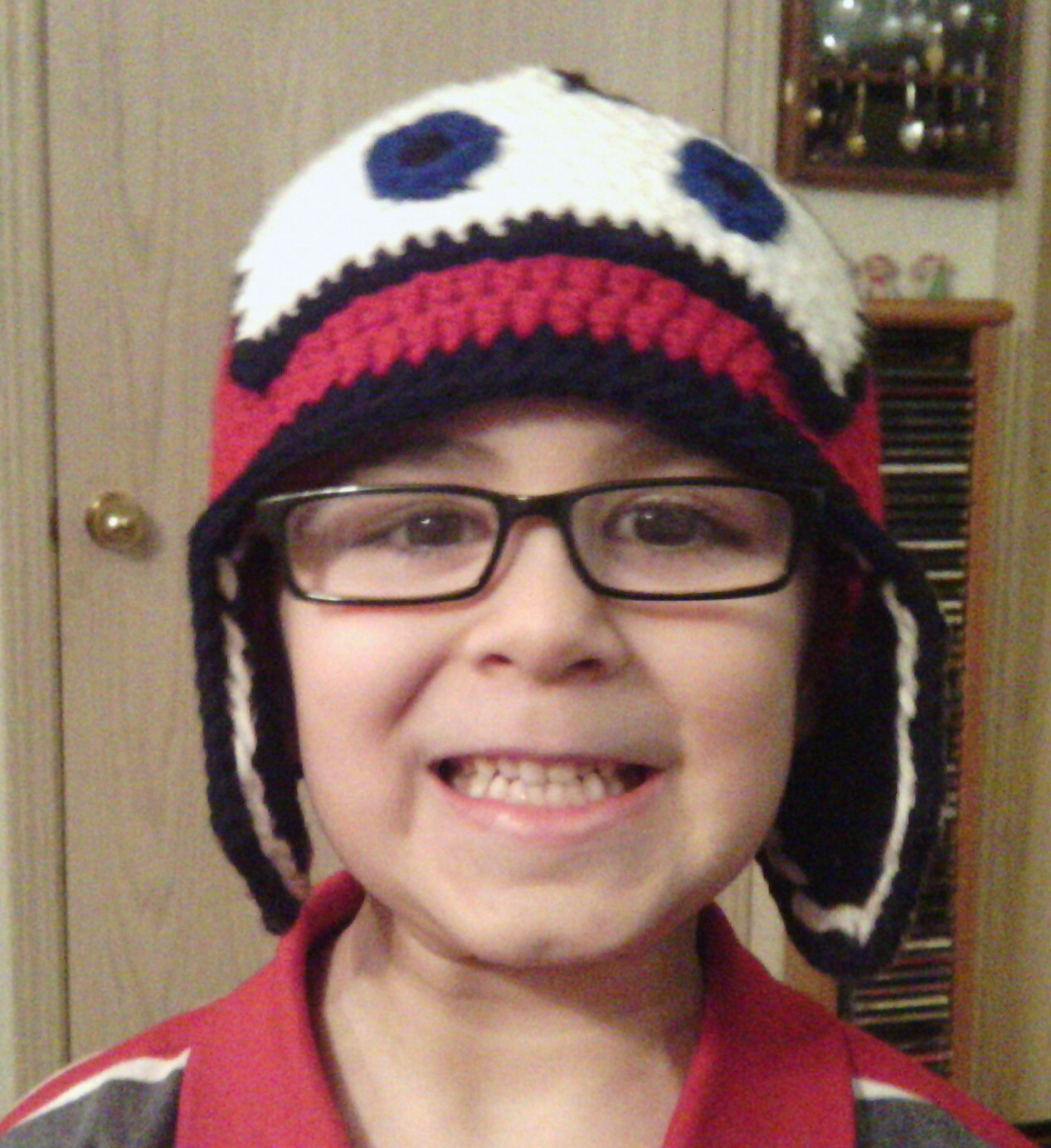 Jacob is our race car and super hero fan. So he got a Lightning McQueen hat. I did find a pattern for it here but since I was working with a serious deadline, I made the decision to work with hat patterns I have worked in the past.

Due to the differece in yarn weights, I ended up combining two of them... yes, I probably do have issues, but it worked out great. I used this pattern for the body and this pattern to work the ear flaps. No, everything did not come out perfect, but with a bunch of stitch markers and quiet time to count stitches I think it turned out great. 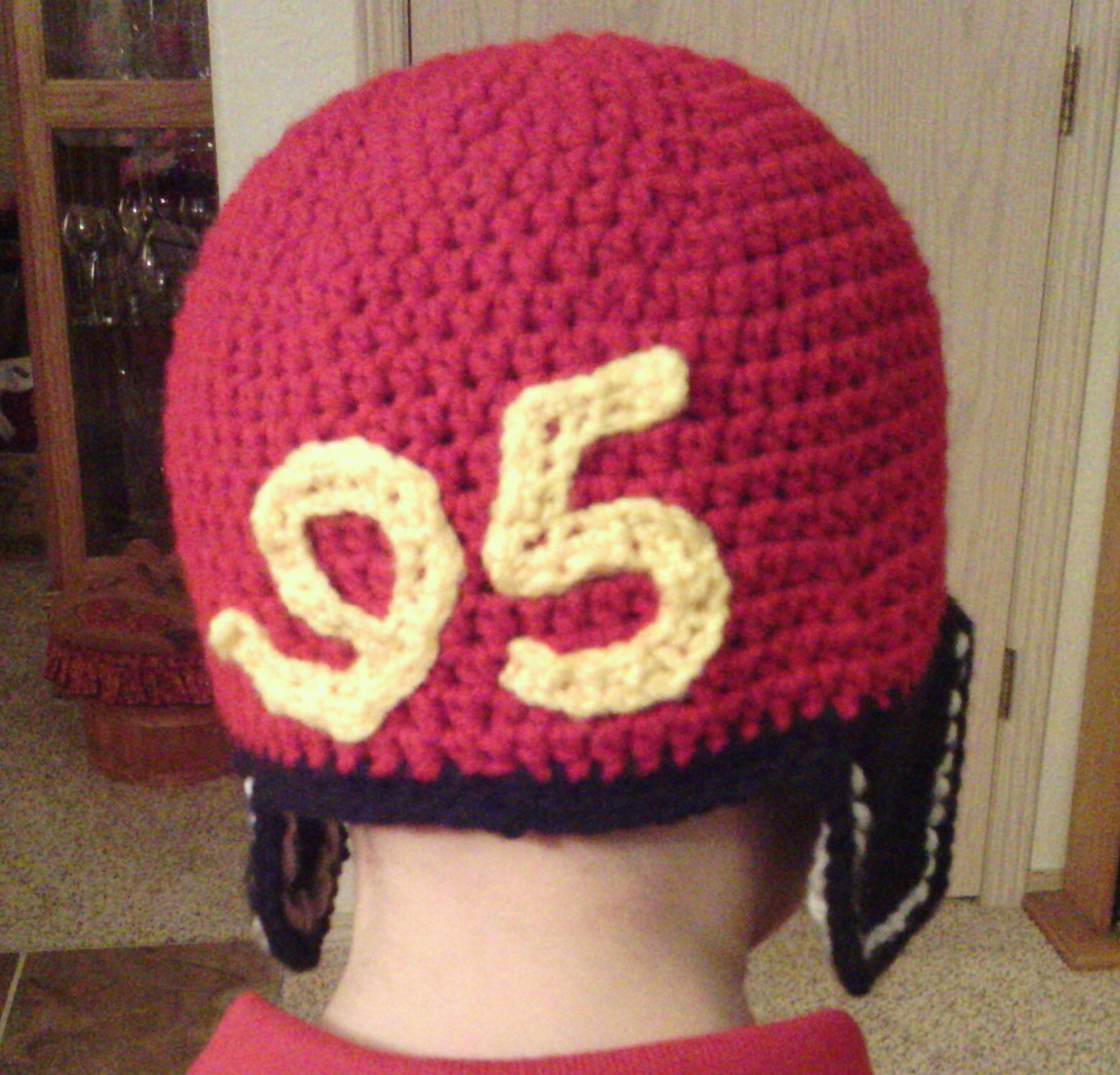 The front "eye" part of the hat was pretty easy, placing the eyes not so much, it's hard to see what it is going to look like with the ends in the way, then sewing it on, I had to unstitch a couple times because it was crooked.

Then I had an idea for a lightning bolt in the back, like "CAA-CHING" thing that he does, right? Have you ever tried to crochet a lightning bolt??? Well there is a serious lack of patterns for them on the interwebs out there! My attempts ended up looking like malformed yellow carrot noses!


So, I picked up a hook and some yarn and thought, what's the worst thing I could do? A single chain and put his numbers on there... well that turned into how can I make the yarn bend? A few tries later I ended up with two squirrley pieces of yarn that successfully made the "95" on the back of his hat!

It felt like a glorious breakthrough! I know they're crooked, but dangit, I don't care (too much anyway) even if I didn't write down the pattern. *sigh* 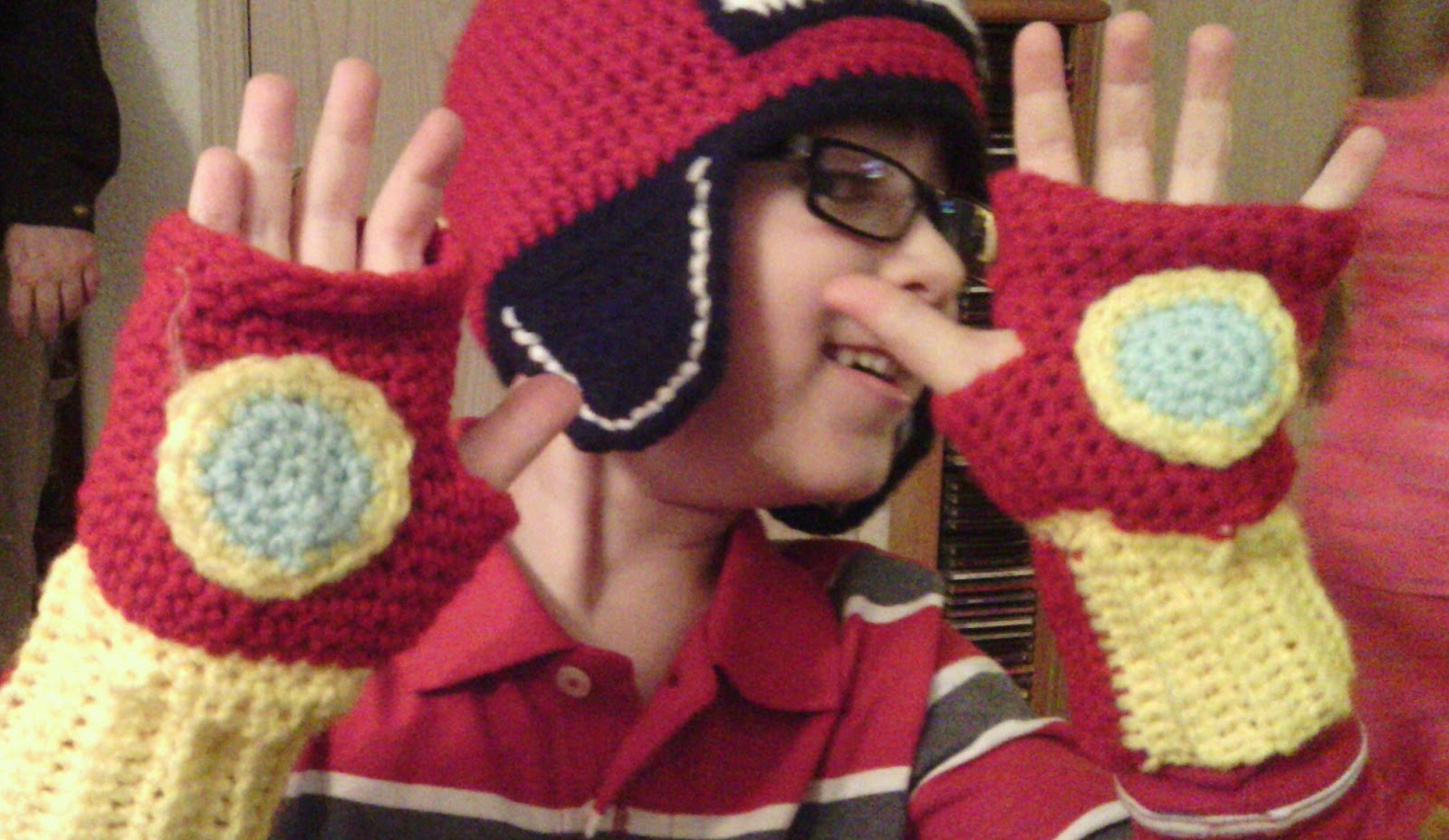 Jacob also got some Iron Man fingerless gloves. I had made some a few years ago of the most simple pattern and they've since been lost or misplaced. I saw the pattern for these and thought they were perfect for this little boy! I had a difficult time with these, the pattern I found here was confusing to read and not the best print out in black-and-white printing. The last straw was when everyone was up, we were supposed to be leaving for my parent's house to open Santa presents and I realized that the thumbs were both on the same side! I had to figure out how to make them match & get those blaster thingies on the same sides! I turned one inside out. I didn't have enough time to make another one, let alone WANT to make another one! No one's noticed and I don't really care. The most important thing was that he loved them.

Then on the night of the 29th, we celebrated my birthday: 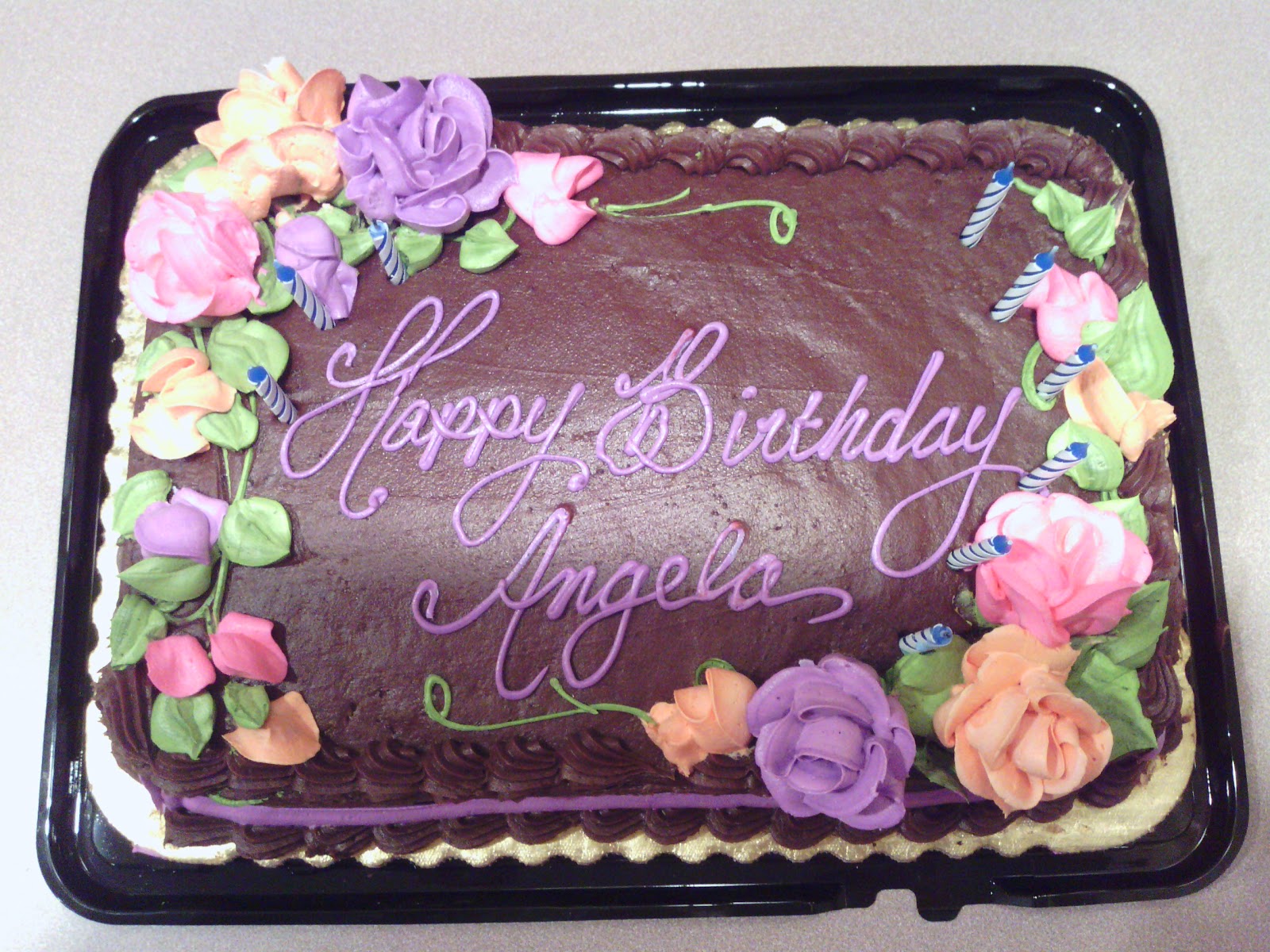 I did get some great goodies for crochet... I received 3 rosewood crochet hooks, sizes G, H & I. I was using the G hook on a scarf for my mother-in-law and the hook snapped off! Sadness!! So, now I'm down to just the H & I. I loved using them, they're nice and long and very light weight. (GEEK TRIVIA: Fleur Delacour used a rosewood wand.) I also received like 5 pom-pom makers. Those will be so much easier than trying to figure out how to make different sizes and what I should make them with.
Overall, we all had a really nice Christmas and New Year.
Kids go back to school tomorrow, we'll have the same ol' full house tomorrow night - I've kind of missed it.
What would I like to see for this new year? I'd love to move, move into some where that we're not always under each other's feet, but not too far away from each other. I'd love to build up more stock for another craft fair or two. Another garage sale in the summer? More sales of crocheting things? Who knows... all that truly matters is the important things: health, happiness and love, and in the aspect of achieving those things, I'm truly thankful.
May you find your happiness, keep your healthfullness and feel loved in the New Year.
Posted by Unknown at 1:00 PM
Email ThisBlogThis!Share to TwitterShare to FacebookShare to Pinterest
Labels: Christmas, Crochet, Family, Pattern Links, Update