Well, one down - finally! Thank you to all friends and family that came by to support us. Both my co-workers had beautiful jewelry that looked dazzling on their displays. Also, a huge thanks to my son, Riley, who actually was a big help as I frantically tried to make sure we had everything, arrived 90 minutes late, then tried to figure out the spastic layout of that school. He was pretty awesome during the day.
As I'm sure more seasoned vendors could tell me - I didn't make as much profit as I had hoped. Oh, well, I received a lesson on pricing. I had a few cozy/coaster sets that sold at the original pricing, however as soon as I dropped the price to $1 in the last hour they went much faster, a lot of lookie-loos that first came by earlier in the day did end up returning to get them as well. That was a nice surprise.
Business cards were taken. Received a lot of compliments on the photo slide show I had running on my tablet on the table. I talked with everyone I could, offered to take special orders... I hope that some of these people will come visit this blog or e-mail me.
On another note... I felt pretty good for most of the day! No frantic racing for the bathroom, no icky tummy; which was an incredible improvement over the last 3 days.
Mom was adorable! She hurt her knee the other day, but she still showed up limping all over the place doing not only her shopping but networking for me! She was able to make contact with another vendor that's involved in a craft fair vendor group that does 4 shows a year (seems reasonable - but could drive family crazy!). However, to have the opportunity to learn from more seasoned vendors could be a grand education. That will definately be something worth looking into. Then when that was all done and her shopping finished, she bought a platter of cookies for all of us working at our space. So sweet!
Mom also gave us the best comment of the day. As she arrived, she became the first customer for Riley and I. She bought a cozy/coaster from me and a game of Magic: The Gathering from Riley. As she finished her transaction with me she turned towards Riley and said, "Ok, Ri, show me one of your magic tricks." I died - it was so cute and sweet! However, she quickly learned what she got herself into as she turned to me about 5 minutes later asking if I have ever played it. I know better, not my speed, I just like the artwork on some of the cards.
So, for roughly 8 hours of "sales", a little cash in my pocket, I now plan on taking the rest of my stock to work where I'll set it up there to sell, 50% of the proceeds will benefit our office Christmas Family.  I still need to get rid of some extra yarn that I have so here come more hats!
Thank you again to everyone that stopped by yesterday, I had a great time meeting everyone. 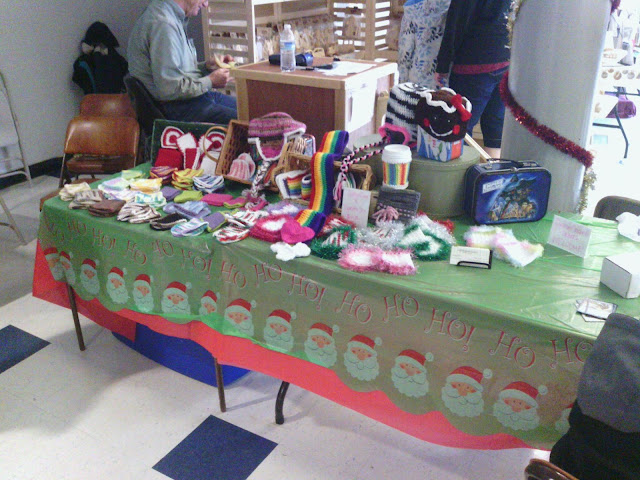 Posted by Unknown at 9:52 AM
Email ThisBlogThis!Share to TwitterShare to FacebookShare to Pinterest
Labels: Craft Fair
Location: Olympia, Olympia